Travelling with a CPAP machine keeps getting easier.

Whether you’re bringing your home CPAP in a shoulder bag on the plane, or you’ve rented a travel CPAP for the next great road trip, leaving home doesn’t mean leaving better sleep behind. But what if your adventures take you to a place without easy access to power? What if you’re going to sleep in a tent, or that cabin where the power goes out every time there’s a rainstorm? With CPAP batteries, what used to mean suffering through off nights while you’re away can now be as comfortable as sleeping at home (mosquitoes notwithstanding).

After testing options for travel CPAP machines a few weeks ago, it was time to push the test even further and see how they could perform untethered. The option to run on a battery means you can use your CPAP anywhere – whether on a plane, the passenger seat of a car, or on a crazy backwoods adventure. On trial this time were the Medistrom Pilot-12 Lite and Pilot-24 Lite batteries, as well as their many charging options.

Getting the right battery for the job

The first thing I was surprised to discover is that even though there are different voltages (12 and 24-volt versions, as the names imply) there really isn’t a runtime advantage to the higher voltage battery.

The 12V works for some machines, and the 24V for others. I won’t give the whole which-battery-for-which-machine breakdown here (the team at Apnée Santé will make sure you get the size you need) but the general idea is that whichever one you’re using, it will provide reliable power for one night’s sleep (an average of 12-13 hours to be exact, and if you’re getting more sleep than that you’re luckier than me). The batteries (either voltage) weigh next to nothing and are easy to use. They both have a power button and a light to show when they’re in use, and there’s a gauge to show how much charge is left. Charging and plugging in machines is simple and foolproof, and the batteries even have a built-in LED flashlight to help you get your tubes and cables untangled in the dark.

The cores of these batteries are lithium-ion, which makes for a couple of key advantages: first, they’ll maintain full power output until just before they’re drained, so you won’t lose air pressure as the night goes on. Another perk is they’ll hold their charge for an incredibly long time while sitting idle, so when you put one away charged you can just pick it up and go the next time (though they insist in the manual that occasional users still charge them once every six months). Videos about the Pilot 12 and 24 batteries

The many ways to get charged

But wait! If I’m going camping and the battery only works for one night, what good is it? Well not to worry. First of all, if you’re somewhere with access to power even for a short while during the day, you’re all set. The manual says the batteries will charge in 2-3 hours, but I found charging much faster than that.

If you can’t get to an outlet, the automotive charger (sold separately) is next in line: in my test the 24V battery got a full charge while I drove off and on throughout my day. I even took a shot at leaving the keys in the car with the ignition off in the driveway, and found I could get a full charge in around 90 minutes and still have plenty of juice left to start the car (though no promises there if your car battery is on its last legs).

If you’re so remote that you won’t have a car to plug into, the Medistrom solar charger will top up your battery in about the same time. I charged a 12V in an hour on the lawn on a hot sunny day (though it’d obviously take longer under clouds). The solar charger folds away into a neat little pack, and has DC and USB output ports so you can use it to charge all sorts of different batteries and devices. Extra ways to make use of your battery

As an added bonus, Medistrom batteries will not only power your CPAP machine away from home; they can also be used as a fallback in case of power failure. You can plug your battery into the wall, then plug your machine into the battery, and your CPAP will run on regular power but kick seamlessly over to the battery if power fails (it really works – I cheated this test by setting it up and then pulling the plug while the machine was running).

The batteries also have a USB port to juice up your favourite devices (phones and tablets, I’m looking at you!). I fully charged a dead iPhone from the Pilot-12 without putting a dent in the battery gauge, and was still able to run the CPAP overnight. Limitations to know about

While the freedom to take a CPAP on your next trip cataloguing butterflies in the Amazon is decidedly cool, there are drawbacks.

First and most surprisingly, the Respironics DreamStation requires a 12V power source, while the travel version (DreamStation Go) needs a 24V battery. This frankly seems like a strange oversight. The truth is there’s a fair chance that if you have two machines of any make the battery might not work for both of them (which doesn’t matter much but it would be nice to have a battery you could travel with AND use as a backup for your home machine).

The other drawback is you’ll have to turn off your machine’s humidifier or you’ll cut runtime severely – I found out the hard way that if the humidifier is on you only get about three hours before everything shuts down. The DreamStation Go even forces the issue by putting the DC input where the optional humidifier would normally connect. If humidity is crucial to your comfort, the ResMed AirMini with its built-in waterless humidification system is hands down the winner – it’s the only one that can keep up humidity on a battery. Whether you use your home CPAP machine on the road or opt for a travel-sized version, whether you’re a business traveller, an occasional backwoods adventurer, or both – the freedom to continue sleep therapy on a battery is a game changer. Though hard to believe, it’s easily possible to get good sleep without a plug, and to have the peace of mind of knowing that your CPAP machine will keep working no matter what happens to local power, even on a dark and stormy night. 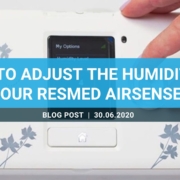 How to adjust the humidity on your Resmed AirSense? A guide to different mask styles Do you really need a humidifier with your CPAP? 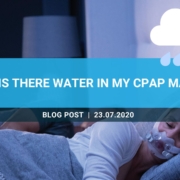 Why is there water in my cpap mask? Do I really have to clean my CPAP all the time?

How to adjust the humidity on your Resmed AirSense?
Scroll to top

We may request cookies to be set on your device. We use cookies to let us know when you visit our websites, how you interact with us, to enrich your user experience, and to customize your relationship with our website.

Click on the different category headings to find out more. You can also change some of your preferences. Note that blocking some types of cookies may impact your experience on our websites and the services we are able to offer.

These cookies are strictly necessary to provide you with services available through our website and to use some of its features.

Because these cookies are strictly necessary to deliver the website, refusing them will have impact how our site functions. You always can block or delete cookies by changing your browser settings and force blocking all cookies on this website. But this will always prompt you to accept/refuse cookies when revisiting our site.

We fully respect if you want to refuse cookies but to avoid asking you again and again kindly allow us to store a cookie for that. You are free to opt out any time or opt in for other cookies to get a better experience. If you refuse cookies we will remove all set cookies in our domain.

We provide you with a list of stored cookies on your computer in our domain so you can check what we stored. Due to security reasons we are not able to show or modify cookies from other domains. You can check these in your browser security settings.

These cookies collect information that is used either in aggregate form to help us understand how our website is being used or how effective our marketing campaigns are, or to help us customize our website and application for you in order to enhance your experience.

If you do not want that we track your visit to our site you can disable tracking in your browser here:

We also use different external services like Google Webfonts, Google Maps, and external Video providers. Since these providers may collect personal data like your IP address we allow you to block them here. Please be aware that this might heavily reduce the functionality and appearance of our site. Changes will take effect once you reload the page.